Local Right Whales Are Inching Closer to Extinction - How Can You Help?

A couple of weeks ago, phones up and down the St. Augustine coast lit up with the same message: “Right whales at the beach.”

Most of the time, these whales can be found off the coast of New England and further north into Canadian waters where they feed and mate. But every year a congregation of right whales travel over 1,000 miles south to the shallow coastal waters of north Florida to give birth to and nurse their young - and every year residents and snowbirds alike flock to the coast for an opportunity to catch a glimpse of these majestic creatures.  Unfortunately, these opportunities are becoming exceedingly rare. The North Atlantic right whale is one of the world’s most endangered large whale species, with as few as 360 left in the ocean. So, what is driving this species to the brink of extinction? You guessed it – people. 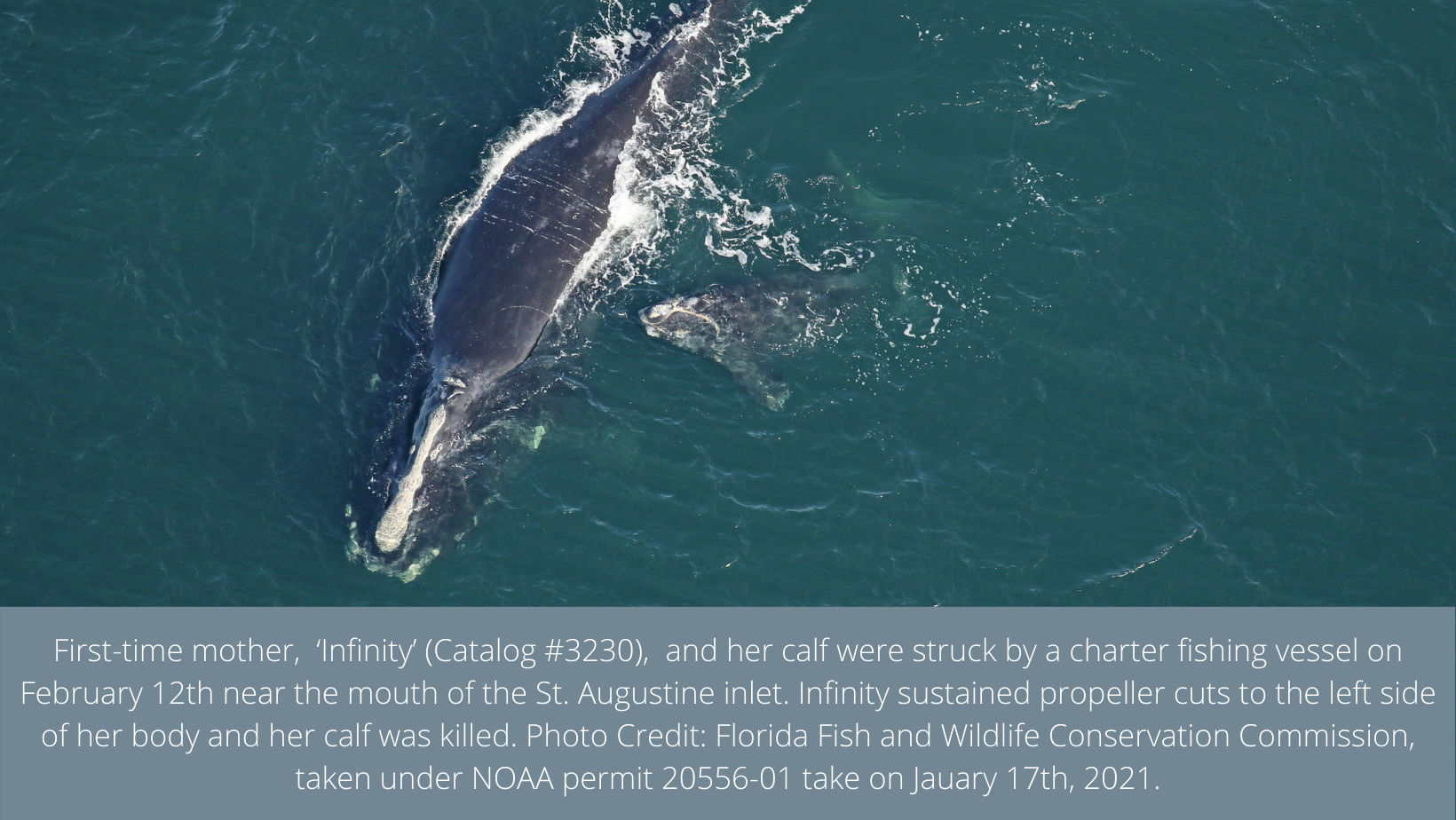 Humans have presented a threat to right whales for as long as we have known they existed. In fact, right whales were thusly named because in the early 1890s they were considered the “right whales” to hunt.  Right whales have been protected from hunting since 1949, but now fishing gear entanglement and boat strikes pose the greatest hazards to these animals. In fact, just last week a right whale calf was killed and its mother was injured when they were struck by a charter fishing boat right here in St. Augustine. Because less than a quarter of right whales are breeding age females and they only give birth around once every 10 years, the species is dying faster than they can reproduce.

Although this paints a grim picture, there is still hope for the North Atlantic Right Whale. Here is what you can do to help: 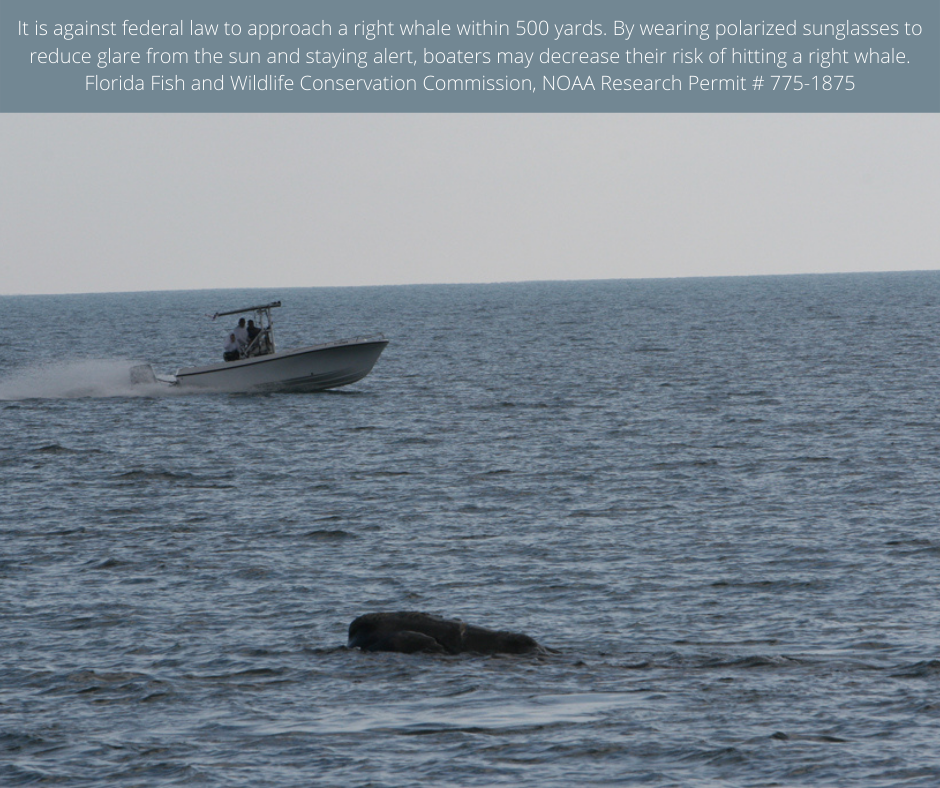 Give them their space

Nursing whales spend the majority of their time at or a few feet below the surface of the water, leaving them more susceptible to human interference. Human interference can cause stress and injury to right whale mothers and calves. It is illegal for anyone to be within 500 yards of a right whale in any direction, including drones in the air, on a boat, or even on a paddleboard.

If you see someone harassing whales, please call the Florida Fish and Wildlife Conservation Commission at 888-404-3922 or NOAA Fisheries Office of Law Enforcement tip line at 800-853-1964. 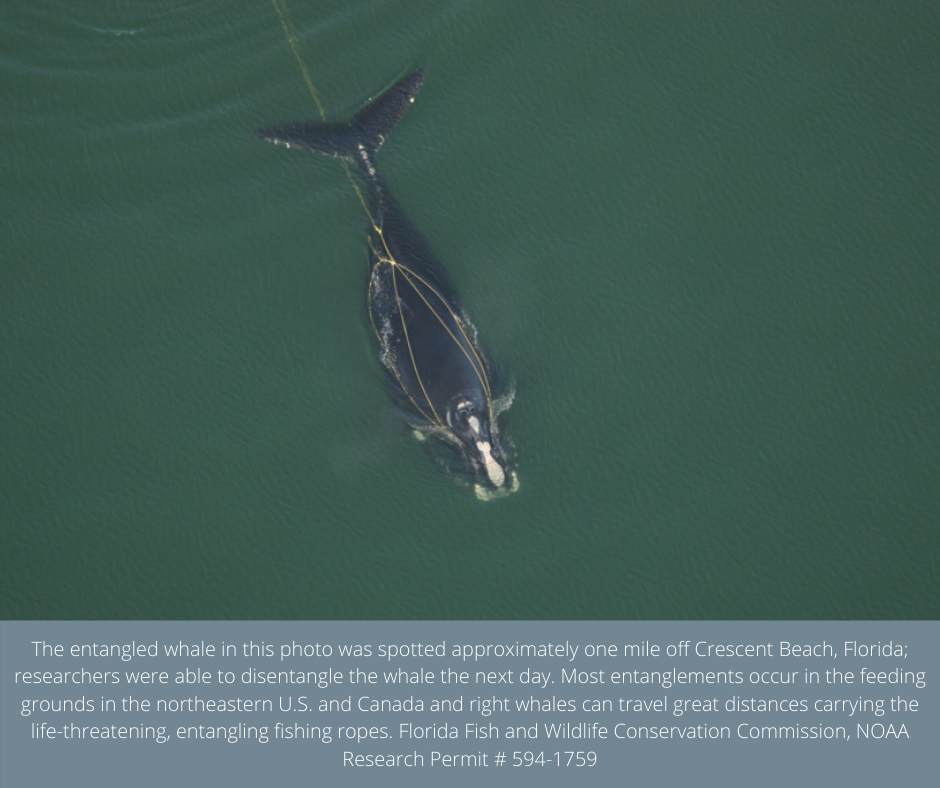 Lobster is generally harvested off the coast of the northeast United States utilizing vertical lines that connect lobster pots on the ocean floor to floating buoys on the surface. Since lobster harvest areas overlap with right whale feeding grounds, whales often become tangled in the fishing gear. As a result, ropes can cut into the mouths and bodies of rights whales and the additional weight of this material can cause stress and fatigue or even cause the animals to drown.

Choosing locally sourced seafood is not only great for our local economy, it is also a sustainable option that helps protect right whales.

Speak up for Right Whales 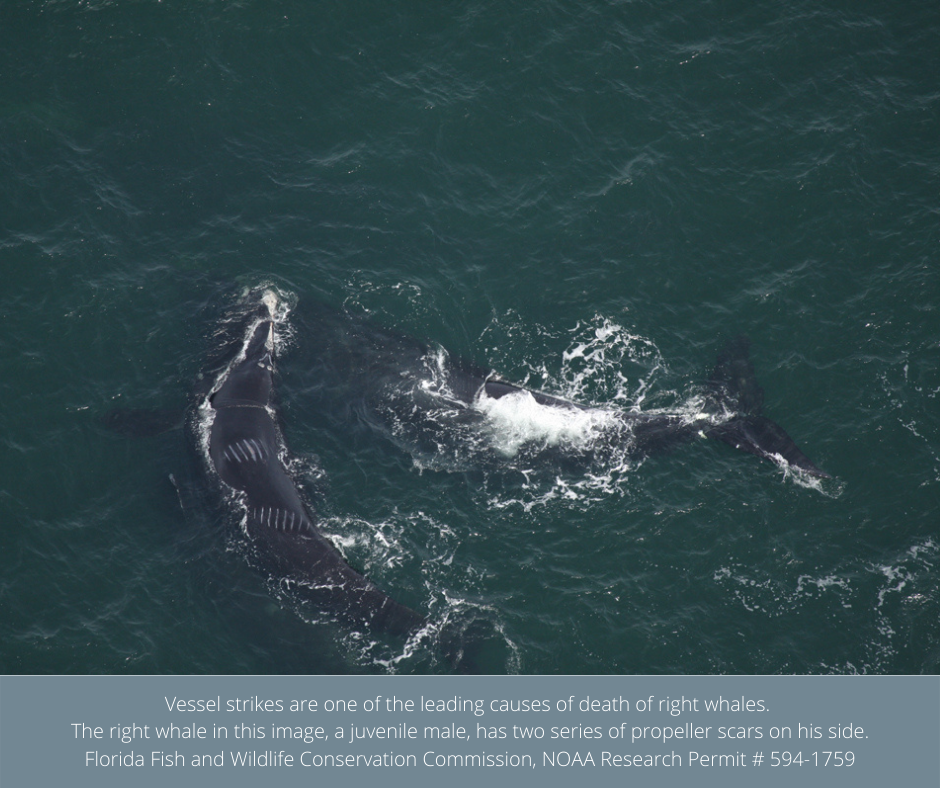 The National Oceanic and Atmospheric Administration (NOAA) is currently in the process of updating rules to protect right whales - one that is intended to reduce entanglements in fishing gear and one to reduce vessel strikes. But many conservation groups argue that the draft rules are not strong enough to save right whales from extinction. NOAA is accepting public comments on the fishing gear entanglement draft rule until March 1st. You can submit a formal comment HERE urging NOAA to expand fishing closures in critical right whale habitat.  NOAA is also accepting public comments on their vessel speed regulation draft rule until March 26th. You can submit comments to [email protected] urging NOAA to increase the boundary of the right whale Southeast Seasonal Management Area to include all the way down to Flagler County where right whales have been spotted this season and to expand vessel speed regulations to include vessels 33-feet and longer, rather than applying only to vessels over 65-feet.